Movement is necessary in the office!

Musculoskeletal disorders are a major problem for office workers.

Ref Muscular and skeletal health in Norway FHI 2022.
The societal costs in Norway in 2016 were calculated at NOK 255 billion. Musculoskeletal injuries, diseases and ailments affect most of us during our lives, and are an important cause of poor health, reduced quality of life, sickness absence and disability. Back pain is the most common of these conditions, and also the one that costs society the most.

A project supported by the Research Council of Norway documented the status of back problems for office workers. 354 office employees from Norway (KGH Custom Service) from Sweden (Kongsberg Maritime, Ving Thomas Cook Northern Europe, Tretton 37) and from Denmark (Kamstrup, Siemens Gamesa, Toyota and OK olje) participated in the survey.

The results showed that:

Dr. Freddy Johnsen came up with the idea that it was possible to sit on the balance board, after the 2nd operation in the lower part of the back. The idea was unique. It was patented. The idea led to the development of the Backapp Smart chair and Backapp 360 balance board. Backapp technology has made it possible for Freddy to work in the office. He shares the positive effects of sitting and exercising in an unbalanced way in the office with more than 120,000 people who have bought Backapp Smart! 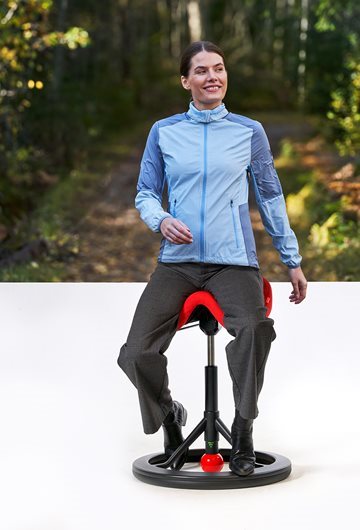