A new type of chair and balance board for six months. What changed?

LähiTapiola employees tested a new type of chairs and balance boards for six months. What changed?

Since every media outlet keeps heralding the health hazards of traditional office work, companies are starting to wake and consider the alternatives. An exceptionally extensive pilot project was undertaken by LähiTapiola, who involved a group of 90 volunteers to pay special attention to body positions at work. The employees received Backapp working chairs and balance boards for six months to boost active work. The pilot project was organized in cooperation between Backapp and Motivire. 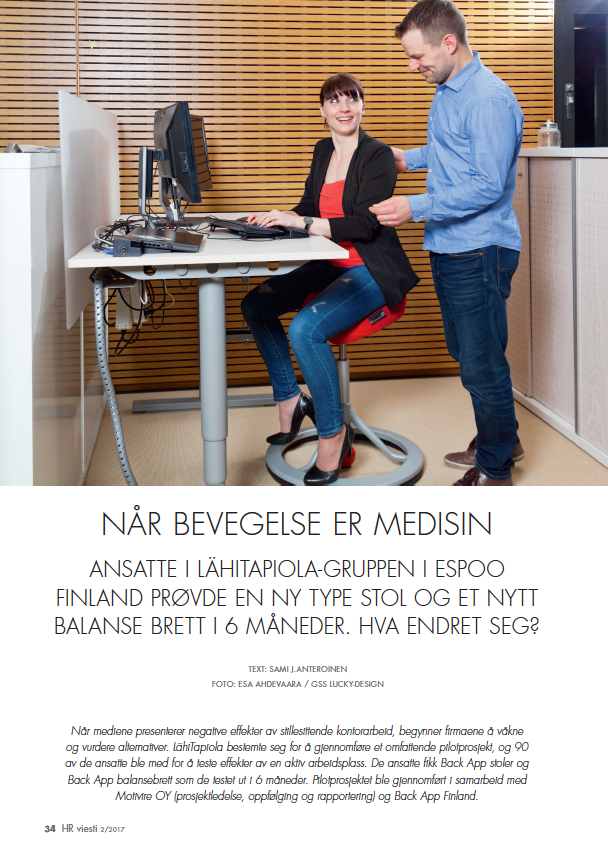 The business manager of LähiTapiola Sari Seppi-Laitinen says that she became interested in the idea, when the managing director of Backapp Finland Atte Salminen paid a visit to introduce the concept. The idea seemed close to heart, because the philosophy of LähiTapiola is to carry out and support together with clients such issues, which promote wellness and health.

"In the future we should contribute even more to services that prevent illnesses and accidents, and this pilot project is related to that," Seppi-Laitinen points out the outsets of the project. She admits that there was some scepticism in the beginning: could the new way of working and the equipment really have such significant effects as were claimed?

People were invited to participate in the pilot project especially from workgroups, where work is mainly carried out at one’s own workstation in the LähiTapiola Espoo campus. "Those who travel a lot, work from home or elsewhere in Finland, where excluded from the project. Anyone from these groups wishing to participate, could do so," Seppi-Laitinen tells.

Finally, in late August/early September 2016, Motivire and Backapp organized two wellbeing mornings in LähiTapiola premises in Espoo. The goal was to stimulate employees’ need for own wellbeing and to train them on the use of the Backapp chair and balance board. The wellbeing training also provided anyone interested with Inbody-720 body composition measuring and the related supporting feedback lecture.

After fine-tuning the motivation, the people of LähiTapiola received Backapp chairs and balance boards for daily use on workdays over the next six months.

The ways people used to work started to change little by little: for example, while three quarters (75.8%) of participants used to sit more than four hours per day, then at the end of the project there were 60% of those who sat more than four hours. Working while standing up sneaked into the routines of the group: while at the beginning 40% of employees were on their feet for more than an hour during the workday, then the figure doubled (87%) by the end of the project.

At the same time, back pain and other troubles diminished by more than 35%. Headache was reduced, fatigue eased up and work capacity improved markedly. Half of the people (50%) assessed their work capacity as excellent (grade 9 or 10) at the beginning of the project, but in two months from the beginning of the project the figure already increased to two thirds (66.6%).

Service Manager Minna Kontkanen told that she joined the project, thinking that the result could be nothing but improvement. The Backapp chair also seemed promising to Kontkanen, so expectations were high. Not all chairs will do for Kontkanen, whose back has been operated already twice, while hip and lower back pains have been the usual trouble.

"The saddle chair, which I used earlier, already made my tail bone painful and the normal office chair I have shunned for years. Normally I either stood on my feet or sat on an old saddle chair," Kontkanen says and adds that she had used the balancing board from time to time already before the experiment.

At the beginning of the project Kontkanen - and a few others - had stiffness in the shoulder and acromial area, but the pain vanished soon after the start, as soon as the settings were changed. Then Kontkanen really fell in love with the chair:

"With this chair you can keep yourself in constant slight movement, and you no longer sit passively. I have no more pain, and instead all the pains have vanished either entirely or become substantially smaller", she tells.

"In my opinion the balancing board makes standing up significantly easier.”

"The good results from the pilot project indicated that alternating working positions and Backapp products were truly felt to improve energy levels and wellbeing," points out Sari Seppi-Laitinen. She herself stands on and uses the balancing board at her workplace quite a lot besides the chair.

”I think I have found the right position with both. My own challenge is that my work involves plenty of meetings and discussions, and the chairs used in meeting rooms are usually the traditional ones.”

Tuukka Nieminen from Motivire Oy comments that the experiences of Seppi-Laitinen and Kontkanen are in line with the feedback received from the rest of the group.

"We can conclude that the working capacity experienced and targeted by the pilot group has significantly increased," he sums up.

The role of Motivire Oy is to awaken participants’ interest in their own wellbeing, so that the enthusiasm would be unflagging throughout the entire longish product experiment. Nieminen is satisfied that the people of LähiTapiola "woke up on a single wake-up call" and became really excited about the experiment.